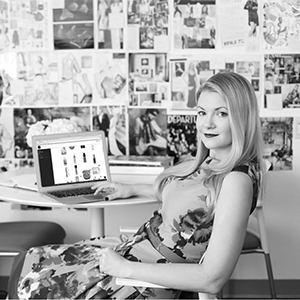 How Shoppable is Turning Content Everywhere into a Three-Click Checkout

Last month, Forbes – in a key review of the tech innovator Shoppable – stated that, as consumers in the age of digital technology, “we increasingly want instant gratification or we’ll choose nothing at all.”

The BPI Network and the CMO Council have long advocated that companies which use integrated data technologies to identify the needs and desires of customers, and who then gratify those needs to make their experience simpler, better, and more affordable, are the brands which are seizing the competitive advantage in the new marketplace.

Shoppable was one of the standout companies presenting at the global launch conference DEMO Traction in Boston last month, which was held in partnership with the CMO Council and the CIO Council.

And the central reason why this four-year-old technology company turned heads amongst DEMO’s hundreds of corporate decision makers was that its digital products define what instant gratification means in the digital world.

While Amazon’s model has been hugely disruptive, to the benefit of tens of millions of consumers, this New York-based technology company has a goal that, in many ways, is even more ambitious: “Our mission is to make the entire Internet Shoppable.”

In summary:  Shoppable is the original universal check-out, which allows customers to purchase products wherever they encounter them online, outside of the retailer’s website – and to do so in as few as three clicks of a mouse.

It is turning passive product references into “live” things across the web – and turning content inspiration directly into easy sales.

“Affiliate marketing” has been around since the 90s, through companies like eBay, but conversion rates have remained low due to the dozen or so mouse clicks required to make the order.

According to the Robin Report, Shoppable defines “distributed commerce,” and what its patent-pending technology represents, quite simply, as “the 'next big thing' in distribution."

In an interview, Shoppable's CEO, Heather Marie, told the BPI Network and CMO Council that the time will soon come when consumers can click on any reference to virtually any product – whether in an online magazine, or an on-line ad, or on social media – and purchase that product within seconds, and without ever needing to leave the web page.

Indeed, online shoppers can already do so from hundreds of sites, and from among 15 million products integrated into the Shoppable software.

And Marie told BPI that the technology has already been used 300 million times by consumers in the past year.

She said: “Our partners found that, without this technology, it would take 10 to 20 clicks for users get to the purchase – certainly, I’d quit long before I got to twenty clicks. With Shoppable, its three clicks; in a few cases, it's just two.”

Formerly a sales strategy leader with Affinity Labs and Monster Worldwide, Marie conceived Shoppable in the classic manner of the world’s most disruptive innovators: as a frustrated consumer.

“Several times, I’d seen different products online and wanted to buy them – but I’d give up after 45 minutes of searching,” said Marie. “I thought: I’m trying to spend my money here, and I’m not being allowed to. For example: I remember finding a great throw rug on the Elle Décor website  – and then thinking: how do I buy it? How do you Google search that? “Blue-green throw rug Elle”?  Prior to Shoppable, retailers were forcing users to go to you, with all the inconvenience that involves, and then to be an expert searcher. I thought: “Why can’t we change this around, and make products available everywhere they’re encountered online?”

Marie became an entrepreneur at age 11 – launching an arbitrage business on eBay. 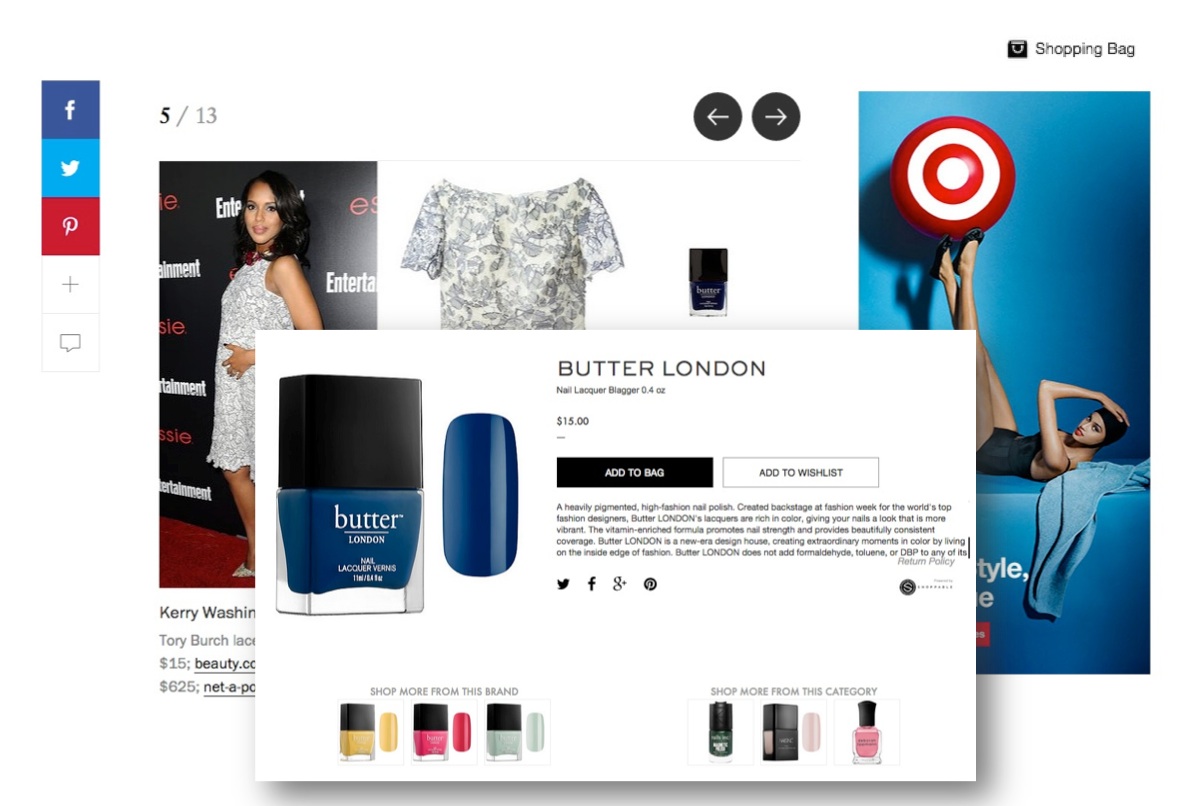 Armed with business degrees obtained in San Francisco and London, she worked with leading retail clothing brands like Express Limited and Abercrombie & Fitch, and was on the founding team of digital media innovator Affinity Labs.

She has been named one of the 11 “tech gurus changing the luxury game,” and one of the 10 “Most powerful Millennials in Manhattan” by Gotham Magazine.

Marie assembled a technical team, which quickly solved the consumer-driven challenges: first, the software for a universal check-out, and second, “being able to make someone else’s site shoppable and integrated with our checkout.”

For example: users on Buzzfeed who encounter Loreal’s Beauty Roulette ad campaign will see numerous combinations of eye make-up and lipstick on a model flashing on the screen. After clicking “stop” on a look they admire, users can click “Buy this look,” and immediately find themselves two clicks away from owning all the products involved, via Shoppable.

Increasingly, users will see buy buttons and “shop the story” icons in their content, in which products from multiple retailers will be quickly available without ever leaving the website.

Thirdly: Marie’s team had to respond to customized needs among publishers. While most were happy to have buy buttons embedded everywhere, some preferred not to have them on their home pages, and some needed to separate editorial from sales.

So while the “buy-in-three-clicks from any website” concept may seem the most dramatic innovation, it’s the flexibility Shoppable offers which could prove the true disruption.

“We created technology which is incredibly flexible – it can be used directly within advertising, such as native ads and IAB, or it can be used in digital media sites. Generally, it makes sense for our partners to use it everywhere on their sites. But companies have the opportunity to customize – if they say: ‘this must be separate from newsroom content’, or ‘we need this feature everywhere except our home page’, they can certainly do that.”

Some famous content providers are using the new model on a seasonal basis: “We created an online shop with the Wall Street Journal; we’ve also done Shoppable content with Conde Naste; we can also work with mobile apps,” said Marie.

However – until now – content platforms have had to manually add buy buttons for integrated products.

At DEMO, Marie announced the launch of a new product with truly disruptive potential: “Magic” – which rapidly searches out integrated products throughout all nominated content within a website, and automatically plugs in Shoppable buy buttons.

Remarkably: Magic also automatically makes future content shoppable – while additionally excluding products that are discontinued or out of stock.

Marie told DEMO: “Magic is exciting because it allows any media company or blogger to go through a single very short process, integrate our technology, and – literally within a couple of hours – it can go through billions of pages, and plug in Shoppable technology, as long as those products are among the 15 million products we work with.”

She added: “For larger companies, with vast amounts of page views and so much evergreen content – they can’t have someone go through every page to curate content. They needed an automated system, and so we developed this amazing software which pulls in massive amounts of data and does all the plug-ins automatically.”

Referring to a DEMO call by Donovan Neale-May – executive director of the CMO Council – to harness integrated data to engage customers with more relevant offers, Marie said Shoppable also offered key data insights: “Each retailer only gets their own information – but we have a view into the data of consumer shopping, between multiple retailers and across 3rd party sites. Donovan talked about personalization and the importance of speaking to consumers one to one, and to reduce hassle for them – and what we do is to bring relevant products, digitally, to them.”

Asked by judges at DEMO about new competition in on-line check-outs, Marie said: “Most other competitors – who launched their platforms after we did it originally – don’t work with retailers. If you ask them, they’ll tell you it's too hard.  You can’t build a professional service business selling other brands products without permission from the brand to do so. It’s a house of cards that will fall apart. The reality is: to create a true shoppable experience online, it’s imperative that you have connections in with these merchants to provide a trustworthy and reliable service, give users a consistent experience and to expand the opportunities for joint-revenue growth with the merchants.”

Finally, the revenue-share model of the system sees commissions triggered to the content partner and Shoppable, while the retail price for consumers remains the same.

Marie said: “One fundamental benefit for media companies is that every website owner wants a good user experience. For instance – Had I been able to purchase that throw rug directly from the Elle Decor website, I’d have had an even higher regard for the Elle brand. Another is keeping the user within your site – the last thing media companies want is for you to discover something you want on their site, and then have to migrate away to Amazon or some other site.”

Marie hinted that more major innovations were on the near horizon: “We are constantly developing new technologies, and we have a lot of really exciting features in the next year; even within 6 months.”