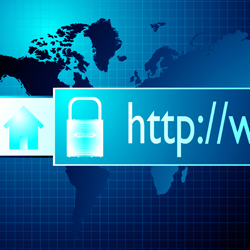 Since the mid-1990s, the Internet has had a transformational impact on global culture and commerce. From the development of new forms of communication, like email, instant messaging and Voice over Internet Protocol products and services, to the World Wide Web, with its some 3.5 billion pages of content, online shopping sites, digital video and music distribution services, cloud computing applications and social networks—the Internet has altered almost every aspect of business and daily life.

The Internet is a network of networks, a global system of interconnected computer networks communicating via the Transmission Control Protocol/Internet Protocol standard (TCP/IP) to serve several billion users worldwide. It consists of millions of private, public, academic, business, and government networks linked by a range of electronic, wireless and optical networking technologies.

The world was first introduced to the concepts that would lead to the Internet in 1969 when a message was sent over the ARPANET from the University of California, Los Angeles (UCLA) to at Stanford Research Institute (SRI). ARPANET was one of the world's first operational packet switching networks and the first networks to implement TCP/IP. TCP/IP network access expanded in 1986 when the National Science Foundation Network (NSFNET) provided access to computer sites in the United States from research and education organizations. In 1995, the Internet was finally commercialized when NSFNET was decommissioned, removing the last restrictions on the use of the Internet to carry commercial traffic. 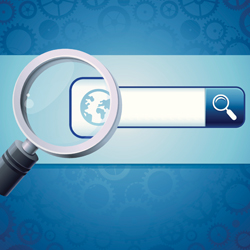 There were nearly 3.5 billion web pages as of October 25, 2013, according to WorldWideWebSize.com. The major search engines, Google, Bing and Yahoo Search, have indexed all of that content. Search is the foundation of the web. It changed the relationship between people and knowledge by allowing users to find and access information, digital content and new experiences across those billions of available pages.

The grandfather of all search engines was a program called “Archie,” which stood for “archive” minus the “v”. Created in 1990 by computer science students at McGill University in Montreal, Archie downloaded the directory listings of sites, creating a searchable database of file names. It didn’t index the contents of these sites. However, since the amount of data was so limited it could be readily searched manually.

One of the first "all text" crawler-based search engines, Web Crawler, came out in 1994, allowing users to search for any word on any webpage. There were soon a wide variety of commercial search engines vying for popularity, including Yahoo!, Magellan, Lycos, Infoseek, and Excite.

Google revolutionized search and became the dominant search program around 2000. Two Stanford graduate students, Larry Page and Sergey Brin, started Google in 1996. Their original innovation was “PageRank,” an algorithm that ranked web pages based on the number and PageRank of other sites and pages that linked there. The result was a search capability that was far superior to any that came before it. In May 2011, the number of monthly unique visitors to Google surpassed one billion for the first time. 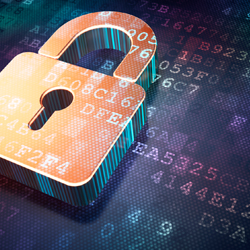 We live in an age of high-speed access to information and transactional data. You can credit the relational database for being one of the fundamental innovations that made this possible. Every time we make an airline reservation, use an ATM, or charge something on our credit card, a database system is working behind the scenes to process the transaction.

Since the development of the relational database model, in 1970, and since the introduction of Oracle as the first commercial relational database system in 1979, database technology has become essential to virtually all transaction processing and business intelligence applications.

Edgar F. Codd first defined the relational model at IBM in 1970 by proposing that applications search for data by content rather than following hierarchical links. Data is represented as a table, with each horizontal row representing a record and each vertical column representing one of the attributes, or fields, of the record. While a number of companies went on to develop database management systems based on the relational model, Oracle was the first to bring one to the commercial market in 1979. 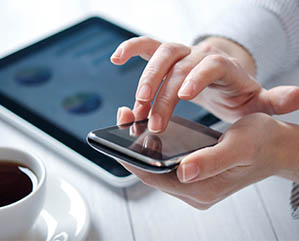 In a relatively short period of time, smartphones have transformed the way a huge portion of the world’s population accesses information, applications, entertainment and commerce. According to ABI Research, there will be 1.4 billion smartphone users around the world by the end of 2013, an astounding 44 percent more than 12 months earlier. Some 61 percent of all U.S. mobile subscribers now own a smartphone. What’s more, 78 percent of US mobile users between the ages of 25-34 and 75 percent between the ages of 18-24, now own smartphones. Some 18 percent of Black Friday sales were made via mobile devices in 2012, versus just 3.2 percent in 2010.

In 2007, Apple introduced the original iPhone, the first mobile phone to use a multi-touch interface. In July 2008, Apple introduced its second generation iPhone with 3G support. It also introduced the App Store, allowing the phone to install third-party native applications. It was the growth of high-speed 3G and 4G wireless networks that made Internet connectivity via mobile devices ubiquitous. Android, by far the market share leader among smartphone operating systems, began development in 2003. Google purchased Android in 2005, with the first Android phone reaching the market in 2008. Android’s free, open source model means it can be adopted by any manufacturer. Android was included in nearly 80 percent of all smartphones shipped in the second quarter of 2013. 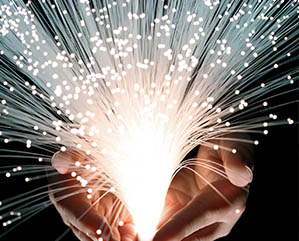 Broadband services, from interactive banking and shopping to online video, music and gaming, have redefined the world of communications, commerce and entertainment. Cisco predicts that there will be some 15 billion connected devices in the world by 2015 and Internet traffic will reach 966 exabytes, or close to 1 trillion gigabytes, per year. A key innovation enabling this explosion in digital communications and content is fiber optics. Modern fiber cables can contain up to a thousand fibers in a single cable, with potential bandwidth in the terabytes per second. Fiber optic cables form the backbone of the Internet, circling the globe and carrying data at speeds other forms of transport cannot approach.

Fiber-optic communication transmits information by sending pulses of light through an optic filter. It’s especially beneficial for long-distance communications because light travels through the fiber with very little attenuation. Fiber Optics is a technology that has been long in the making. Guiding light through refraction was first demonstrated in Paris in early 1840s. Corning Glass Works successfully developed optical fiber in 1970, with attenuation low enough for communication purposes. About the same time, semiconductor lasers were developed that could transport light for long distances.

The erbium-doped fiber amplifier, which dramatically reduced the cost of long-distance fiber systems by eliminating the need for optical-electrical repeaters, was invented in 1986 by David Payne of the University of Southampton and Emmanuel Desurvire at Bell Laboratories. In 1991, Desurvire and Payne demonstrated optical amplifiers that were built into the fiber-optic cable itself. The all-optic system could carry 100 times more information than cable with electronic amplifiers. Since then, telecommunications companies have laid an expansive network of intercity and transoceanic fiber communication lines.